Home base is Aotearoa - "the-land-of-the-long-white-cloud" - a.k.a. New Zealand.


Enjoyed motorcycle touring for about 25 years. 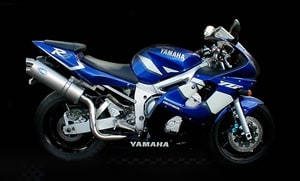 I hate most T.V. but am occasionally distracted by stuff that catches my eye, particularly HBO.

Have a modest collection of music - vinyl (mainly 70s and 80s - LPs, EPs and 12" Singles) and CDs. The first album I ever bought was The Beatles/1962-1966 ('The Red Album'). I try to keep up with contemporary stuff while filling the gaps in the back catalogue. Time and money - don't have much of either. I'm gradually getting my collection up on this site but I'm only up to the Cs so far.

Books I own are mainly non-fiction - myths, history (mostly ancient), military history, sociopolitics and a bit of psychology and metaphysics for a rainy day.

Been slowly building up a collection of books and a database on album art.


I have my rating system down to an inexact science and it goes something like this:

★★★★★(10) - Only about 1% of everything I rate will get a 10. It has to be pretty damn special; it's got the X-factor; it gives me an adrenalin rush; it has an exquisite and almost indefinable quality.
★★★★☆(9) Only about 5-10% of everything I rate gets a 9. A 9 is amazing, most excellent, it ranks among the supreme and the almost-ultimate, one step short of perfection.
★★★★(7-8) - That's very, very good to great. It's special, awesome, exciting and remarkable. It's cool, it's wicked, it's sweet. It's choice, as we Kiwis say.
★★★(6) - A 6 is pretty good, that is, not too shabby at all, but maybe a tad disappointing. It's just kinda average to slightly above average - it's not great, but it ain't bad.
★★☆(5) - Borderline (dangerously). It's humdrum, mediocre and ordinary, perhaps a lack of flair or verve but with the odd redeeming quality or two to save film/actor/music/book crashing into oblivion. Needs a makeover or must try harder next time. Still, it's a pass, and makes the grade . . . just.
★★(3-4) - These are tricky ones. Technically a fail - sometimes means I had high hopes but I was disappointed. Possibly a time-waster. One or two things to recommend it but starting to scrape the bottom of the barrel. Unsatisfactory. 4 is recyclable trash, 3 isn't.
★(1-2) - Where's my weapon. 2 gets a blindfold, 1 doesn't.


“You can teach anyone to be a road racer. Obviously not everyone is going to be a World Champion because there is such a thing as natural ability and that is very hard to measure. No matter how much natural ability you have, though, you still have to learn to race a motorcycle.” 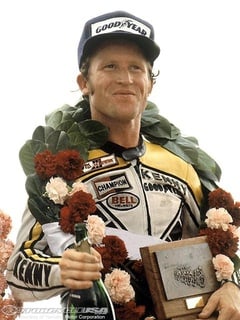 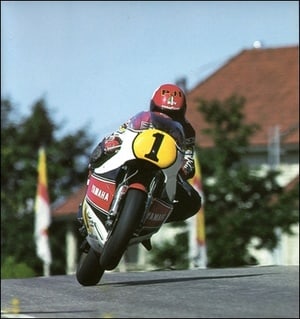 If I had been able to learn from Kenny Roberts when I started motorcycling, I probably would have had fewer crashes. Now, though, whether riding in an event or out on the road touring, Roberts’ words influence my every move and thought.

“Roberts’ verdict on a line, a corner, a bike, a rider, a tyre, anything concerned with racing motorcycles, is sought by every top Grand Prix rider” (Roberts, 1988, Inside jacket). Despite its age, this “bible” of motorcycle road racers by racing legend Kenny Roberts remains the definitive work on motorcycle racing and what it takes to win.

Winning motorcycle races is something Roberts knows about. In 1978, at age twenty-seven, he became the first American to win a World 500 Grand Prix title. Thereafter, Roberts dominated the World Grand Prix circuit and by 1980 had captured three consecutive World 500 Grand Prix championships. On the way to becoming “King Kenny”, master racer and champion, he gained worldwide respect and accolades. Roberts continues to exert a profound influence on the shape of motorcycle racing and on a succeeding generation of rising stars as manager of his own World 500 Grand Prix team and creator of the Grand Prix machine, the Modena KR3.

The secret to Roberts’ success is his use of experts for their specialist knowledge. To put this book together he appointed Peter Clifford as his editor, a road racer and author of "The Art and Science of Motorcycle Road Racing". Clifford shows us Roberts’ words telling us not so much about how to race but of what he did when he raced. Other major contributions come from Peter Ingley on tyres, Dean Miller on physical training and Mike Sinclair on machine preparation. These contributions from the experts clearly reveal that the technical ability to ride fast through corners is not the only prerequisite for road racing. Critical components such as practice, bike set-up, and braking are all covered in detail.

One of these important details is that in many situations a motorcycle rider has only a split second to decide what to do. The classic Roberts’ “little packets” idea, where the rider has a mental packet of actions stored away for use at the appropriate time and place, means you will never need to try to make complex decisions while staring at pain, suffering and possibly death, in front of your visor. Techniques of Motor Cycle Road Racing contains these little packets of information; reading, understanding and practising will make these part of your repertoire of automatic responses.

Along with succinct explanations of techniques, Roberts’ gives us many interesting insights into motorcycling history. For example, in discussing the development of his riding technique, he recollects his early experiences as a dirt track rider. Through those experiences, combined with continuous experimentation in road racing, Roberts found that sliding off the bike and dragging his knee on the ground in the corners gave him better control. In 1971, many riders thought that was really wild. Generally, they had been sitting upright in the corners. When Roberts’ riding style became fully developed, all riders in motorcycle road racing attempted to emulate it.

As far as Roberts’ writing style is concerned, he comes across as a little arrogant at times and perhaps a little harsh in some of his criticisms of other riders. Maybe that is to be expected from a person with a reputation for being fiery, outspoken and candid. Overall, though, this book is easy to read and its structure is simple to follow. Roberts succeeds in giving us a comprehensive analysis of and instruction in racing techniques and an autobiographical account of how he became one of the greatest road racers of our time. Each topic he covers can stand alone within its own chapter, making it a handy reference source that can be read selectively. Every chapter is generously illustrated with photographic highlights of Roberts’ career, as well as some sensational full-page colour photographs of “King Kenny” in full flight. Augmenting illustrations with time-lapse photographs is an effective technique used to show methods of picking a line, braking, and so on. These show Roberts on the bike demonstrating how it should all look at each step of the manoeuvre.

For readers interested in the pure mechanics of a step-by-step “how to” manual, then Keith Code’s "The Soft Science of Road Racing Motorcycles" or his two volume "A Twist of the Wrist: The Motorcycle Road Racers Handbook" will probably do. However, if you do not want obtuse and difficult-to-read technical books, then consider Roberts’ book as “Motor Racing for Dummies”, except that here we get the inside line on what it takes to be the best, written by the best. No matter what sort of motorcyclist you are, if you want to improve your riding, have an interest in motorsport, or just want to learn more about a man of talent, courage and vision, then this book by Kenny Roberts is, like his riding, hard to beat.

0 comments, Reply to this entry


I've owned a Rubik's Cube since the early '80s. I rated it one star because it's colourful and it makes an interesting paperweight. I've never been able to do it. I don't get it. I even have an instruction booklet - I don't understand that either. I can pull apart a motorcycle and put it back together again, but I cannot deal with this piece of plastic. I keep it as a constant reminder of how dumb I really am. The current world record for single time on a 3×3×3 Rubik's Cube was set by Feliks Zemdegs, who had a best time of 6.77 seconds at the Melbourne Cube Day 2010. Amazing.

0 comments, Reply to this entry

luuhs
Posted: 6 years, 7 months ago at Jul 20 1:01
Did you miss me? Well, miss me no more, cause I’m back here to finish what I have started. I think all of you who have participated deserve to know how it ends. Meaning I’m going to finish my “Who’s Listal’s Favorite Female Model” list, and later on see what happens, if I’ll be staying or leaving once that is done. We’re very close to arriving at the list’s top ten, so, every vote counts, especially cause in this next 20 days, half of the girls who are still on the list will be eliminated.

johanlefourbe
Posted: 9 years ago at Feb 17 14:40
I'm working on a new project and you're part of it! If you want, you can check it out: www.listal.com/list/around-world-listals-members

the giraffe
Posted: 9 years ago at Feb 4 16:22
Hey man. Thank you for the vote & complimentary comments on my Songs and what they mean to me list. Since you enjoyed it you might also enjoy my I was a preteen metalhead list, which is also as much about my love of music as it is autobiographical.

Hope you have a great weekend!

Nonfictionguy
Posted: 9 years ago at Jan 31 19:43
Welcome to Listal, and many thanks for voting for the Listal Help List! Thank you also for the comments :D
Edit: 9 years ago